So the Open is over and like me, many of you are probably thinking about training and goals for the coming months. A common question that I receive as a coach around this time every year is “What do I need to do in order to get stronger?”

Keeping in mind that you are a CrossFit athlete first and foremost, being stronger will help you immensely in your training. Many athletes have great movement patterns but a lack of strength is the only thing keeping them from going Rx in workouts. Other athletes just have goals to lift bigger loads and get bigger. Here are 5 things to implement into your training regimen to get stronger:

Heavy weights need to be lifted in order to get stronger. Now we just need to discuss the definition of “heavy.”

We as CrossFit coaches generally incorporate percentages into our strength work. However, these are generally lower percentages and higher reps, which translates more to muscular endurance than muscular strength.

I recently had the privilege of reading through an actual Cal Strength template. For those unaware, Cal Strength is a famous weightlifting gym that has produced several famous weightlifters and strong humans. They squat, then they squat, and then they squat some more. What is interesting about their squat program is that they never squat below 80% of their 1RM and the reps never exceed 3 in a set. They frequently build to a 1RM for that day, and then hit some drop sets based off of that number. This sequence is the exact opposite of how we typically squat.

So what is the take away from this? Squatting in higher volume will benefit your muscular endurance during workouts, but it is not going to improve your pure strength.

I’m not telling you to increase percentages that are listed on the whiteboard during regular programming. My suggestion is that you find time to hit open gym, build up to a heavy single and then hit some more singles or doubles at 90% of that load. This also goes for other power lifts, like deadlift and presses. This does not encompass Olympic lifts though! That’s a whole different conversation!

You will find it much easier to get stronger if you add some size to your frame. This does not mean you should try and put on 10 pounds in the next two weeks. Your WODs will surely suffer, but having some extra mass will help you gain muscle easier and move more weight.

There are a lot of other underlying variables present, but thermodynamics say that in order to put weight on you have to consume more energy (Calories) than you use. Simply put, you must to eat more. This is not an invitation to base your meals around ice cream and doughnuts, but incorporate quality foods that will help you gain size. Start eating more calorically dense foods, such as whole milk, peanut butter, nuts, etc. Also eat a higher volume of food. Increase that cup of rice at lunch to a cup and a half.

This is probably the most important point on the list, and very self-explanatory. If you’re seeking muscle growth you need ample sleep to recover and grow. Even if you are getting 7-8 hours a night now, look to increase that number to 9-10 hours. You are going to shock your central nervous system with the increase in strength work and it will need more sleep for optimal recovery.

As much as I’ve promoted squatting, squatting is not the only way to build strength in your legs. There are several effective movements that while we don’t perform regularly at Fringe, can help you get a lot stronger. 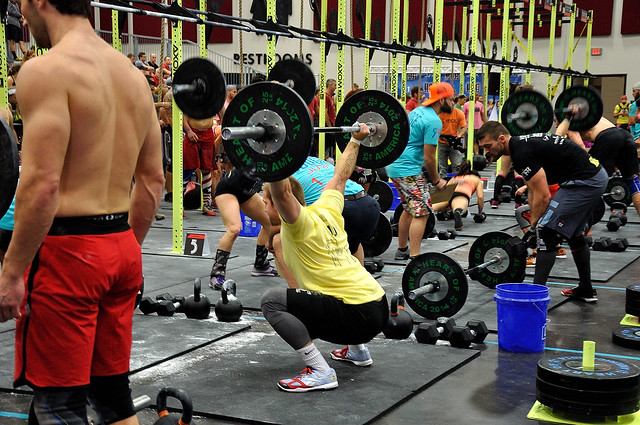 Let’s say your deadlift is poor for your profile. All of your lifts line up, but you just can’t pull much from the ground. Deadlifting and squatting will help you gain posterior chain strength, but you may be missing a certain stimulus from limiting yourself to these movements. It might be that last pull from above the knee to full hip extension that you experience difficulty with.

Incorporate some heavy barbell hip thrusts. You lie on a bench and let your hips sag down off the bench with a weighted barbell lying across them. You then violently throw your hips forward and squeeze your butt. This will help you improve that last pull of your mediocre deadlift and make those hips want to fire through to the finish.

That’s one scenario. How can you identify and fix the movement(s) you are struggling with? Take out your cell phone and tape your lifts. Then find a coach and review them with them. We love to help! I watched a video of my buddy the other day fail a full clean. He caught it nicely, began driving up, and his elbows started to cave forward and he lost the lift forward. We’ve all seen this happen to someone and have most likely experienced this ourselves at one point. After viewing the video, it appeared his midline was collapsing on him. Midline stabilization is one of the five unchanging elements of CrossFit. No matter the situation, we always need to see midline stablility. So I did not recommend my buddy squat or clean more, or work on clean positioning or mobility. I recommended that he work on some L-Sits, GHD sit-ups and hanging raises to strengthen his core.

Be conscious of how you’re lifting

The title of this point may be a little confusing, but it’s very important and affects everyone in a CrossFit gym. Our mantra is to be as powerful as we can. Power is defined as work divided by time. In order to do more work, we incorporate efficiency through methods like kipping and rebounding reps. This is something you want to avoid when focusing on strength gains. Bouncing out of the bottom of a squat will allow you to squat more, but it’s not going to help your overall strength. Let me be careful here. So it will help you to some degree because there will be more weight on the bar and your entire body will have to drive more weight for the remainder of the lift. But that added momentum we’ve put on the bar is similar to someone giving a little lift up to help.

To give you an example, I saw a video of something I’ve never seen before a while back. Charlie Racinowski, probably the strongest human at Fringe, was using chains while power cleaning. I’ve seen this deadlifting and bench-pressing before, but never for power cleans. I initially thought, “Why the hell is he doing that? That can’t be doing anything.” Then I read through the comments and Charlie said something along the lines that it enforces you to put power on the bar throughout the entire movement and not rely on the momentum and power you initially put on it. It made so much sense at that point. That added resistance was really making him pull for an added few feet and working something that he doesn’t get when he normally power cleans. When you’re doing strength work, focus on getting stronger by using stricter movements and not momentum.

Getting stronger isn’t an easy process. It is time-consuming, difficult, and mentally challenging. But the added benefits are more than worth it. Experiment with some of these ideas for a few weeks and hopefully you’ll begin to see an increase in strength and weights that once proved challenging start to feel easier. Please do not hesitate to contact me or another coach if getting stronger is one of your goals and you’re having trouble. We LOVE helping you guys reach your goals.

Disclaimer: These are my own personal views and I have not consulted scientific literature, or any other sources one bit in writing them.